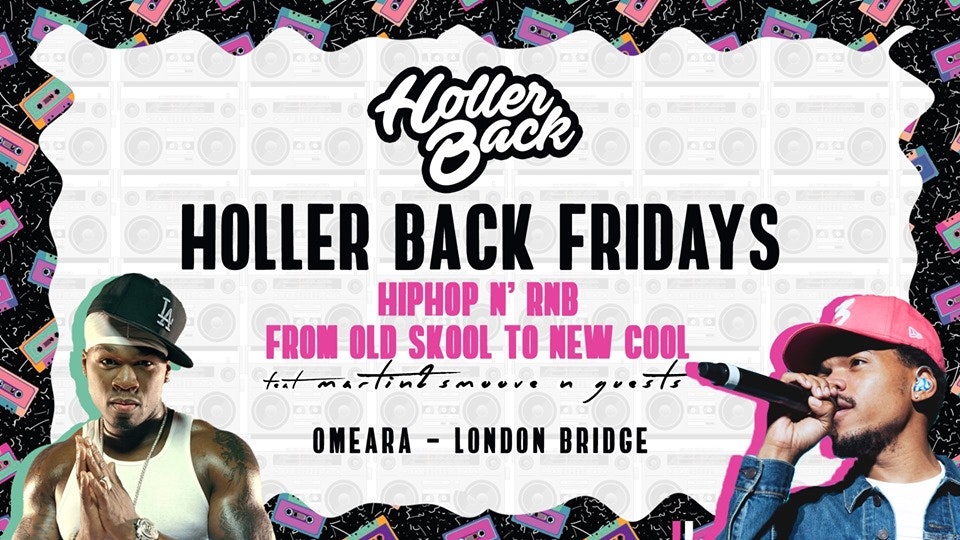 THEY’RE FREE IF YOU’RE A STUDENT! Just grab a Free student pass and bring it along with your student ID/or NUS/or Unidays!

London’s Hottest Friday Night party for anyone who wants to ACTUALLY DANCE is here Held at the South London Culture Hub Club that is OMEARA We’re a night that brings you the best in Old School & New Cool each and every Friday!

Party with us from 10:30pm-4am (Or later if you can handle it!)
And yeh, like well IT’s Holler Back and it’s time to get down and boogieeeeee so Read on for all the info
Curated by Martin 2 Smoove (Tour DJ to HipHop Royalty EVE) we’re calling all Independent Women, Single Ladies and Mamacitas to Drop it Like It’s Hot and meet us In Da Club; where we can Buy You A Drank & watch you Lean Back as we party, once again, with some of London’s finest DJ’s on the 1’s & 2’s.

TICKETS OUT NOW:
So yeah, like get a ticket, come on down, Lead Back, whilst we keep it real and Holler Back!
(They start at £5 every week, even bank holidays!) (We also have a 5 for 4 Ticket Offer!)
Student Tickets – They’re FREE you just need to prove your a student and arrive before 12:30am

OFFERS:
Celebrating a Birthday? Staff Do? Party at Work? Email us now for Good Bookings & Booths n that: hollerbacklondon@gmail.com

Born this Month?! Grab a Free ticket now! It’s free for those born in the month they want to attend! Text: ‘HollerBack Bday’ to 07792664320 (Must be booked & confirmed in advance)

Venue & Location:
Voted London’s best music venue & late night spot in the Time Out LOVE LONDON awards 2018, OMEARA has become the venue of choice for the music industries coolest parties. From Skepta’s private Brit Awards after-party, to the official NME awards showcase, the Mexican inspired ‘Art House’ with a boom bap sound-system to beat any competition is now of of the most in demand venues in the capital featuring an AWESOME Roof Terrace, Garden, Outside Bar, 3 Rooms and the best cocktails in South London.